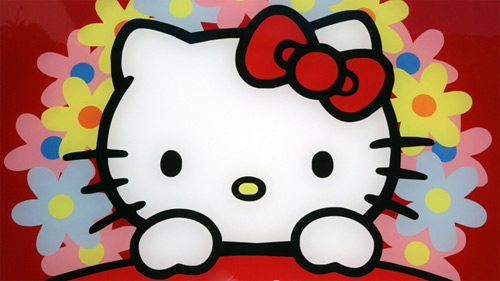 As the feline turns 40 she’s more powerful than ever. But how did she become a brand worth $7bn?

After Japan, Singapore was the first to suffer an outbreak. The infection? Hello Kitty mania. In 2000, a shortage of toys displaying the beloved cat at one of the city’s McDonald’s restaurants led to the unleashing of darker, violent instincts when a riot ensued. Seven people were injured and three taken to hospital for treatment. That was just the beginning.

Now, what is left of our species, children and adults alike, have succumbed, making ‘Kitty chan’, as she is better known in Japan, one of the most recognisable graphics on Earth. Hello Kitty turns 40 this autumn, and we can now see that she was the Trojan Horse that led to the global domination of Japanese ‘cute culture’. From Marrakech to Honolulu, the ubiquitous red-ribboned cat now stands top-tier in any toy display. Googling Mickey Mouse reaps about 23 million results. Search Hello Kitty, however, and you’ll find the kitten, which is basically just a narrative-free, trademarked drawing, garners 10 million more.

Kitty-shaped guitars and even Hello Kitty tombstones abound. The famous feline, originally drawn by designer Yuko Shimizu to appeal to kindergarten children, has been adopted as a style icon by the likes of Lady Gaga. Remarkably, such world-domination has been achieved with little advertising; relying instead on word-of-mouth. Now Hello Kitty appears on over 50,000 products that are sold in more than 70 countries, and is a brand worth $7bn. The company that holds the copyright, Sanrio, makes around $759m in annual revenue off the cat alone. So, why have we all become such pushovers for the feline?

“Kitty's appeal is that she's an emotional blank slate. As one of her designers told me: ‘Kitty feels like you do,’” explains Roland Nozomu Kelts, the author of Japanamerica: How Japanese Pop Culture Has Invaded the US. “We project upon that mouth-less, expressionless kitten, making her the perfectly interactive toy or doll or marketing tool in an age where interactivity is not only desired, it's expected.”

“Hello Kitty represents the deep desire among all people, regardless of nationality or race, to feel joy and happiness, without having to qualify it at any deep intellectual level,” Sanrio’s public relations manager Kazuo Tohmatsu tells BBC Culture. “Hello Kitty doesn't judge. She let's you feel how you feel without forcing you to question why.”

Sanrio made its fortune licensing the character to a slew of other businesses that produce merchandise. “Hello Kitty's many easily-accessible products make it easy to incorporate her into our daily lives and experience the ‘cute culture’ that her brand represents in different ways,” says Michelle Nguyen, who licenses the character for her Chubby Bunny Accessories. That’s why Forbes magazine has called Hello Kitty one of the best-selling licensed entertainment products ever.

So successful has Kitty been that she was chosen to be a Japanese diplomatic envoy, the official tourism ambassador to China and Hong Kong, in 2008. All part of Japan’s drive to bolster its soft power globally through a state-backed campaign dubbed Cool Japan. Promoting manga, anime cartoons and other aspects of Japanese pop culture, it’s an initiative that came about when Japan’s perennially uncool bureaucrats had a vision that cultural exports could help plug the economic gap created by the near collapse of Japan Inc in the 1990s.

Out went promoting wabi sabi and tea ceremonies. In came the country’s pop culture as flagships of Japanese enterprise. Older, less cute merchandise, would only remind the Japanese of their hubris and their bubble economy that burst, taking macho hi-tech Japan with it. Since the ‘90s many in the nation have wanted their culture to get in touch with its feminine side, hence the new love of all things kawaii (rhymes with Hawaii and means cute). Cute is also an important social lubricant in cities where many desperately seek a comfort blanket, a buffer against exceedingly tough urban lifestyles. Japanese companies now take special care in projecting their kawaii image, says Yasuko Nakamura, president of Tokyo-based marketing company Boom Planning: “Japanese products are made to be kawaii so that they are liked by women. In Japan, women hold the spending power. Even for things that women don't purchase themselves, such as a car, they have a strong say in the final decision.”

To rule the world

But why has Hello Kitty made such a foothold in Europe and the United States? Perhaps it is because the western democracies in the past decade have encountered problems similar to those Japan has faced since the 90s: deflation, more work for less pay, an ageing demographic and an unhealthy obsession with youth. Even the once hard-bitten British are falling for Hello Kitty and Osaka-based musician and cultural commentator Nick Currie thinks he knows why. “Hello Kitty symbolises some essential Japanese virtues: agreeableness, harmony, commerce, cuteness, nature, fertility, affluence and the avoidance of aggression,” he says. “She [also] represents the irresistible idiocy of consumer culture, hardwired to our neurological system. We shop with almost the same reflexes that make us stretch out to stroke a big-eyed, fluffy kitten.” That may be a universal impulse.